On March 12, 2019, in Hanoi, on the occasion of the working visit to Vietnam of a high-ranking’ delegation of the International Investment Bank (IIB), Governor Le Minh Hung of the State Bank of Vietnam (SBV) had a meeting with Mr. Nikolay Kosov, Chairman of the IIB’s Board of Directors.

At the meeting, Mr. Nikolay Kosov shared that the activities of the IIB over the past time had many positive and strategic changes. The IIB had successfully implemented the development strategy for the period of 2013-2017 and is currently actively implementing the development strategy for the period of 2018-2022 with outstanding results, such as: the operational scope and financial indicators have been great improved; implementing a new operational model transformation in accordance with modern international practices; the credit ratings of the Bank have been significantly enhanced, etc.

The IIB has provided Vietnam with credit to finance small and medium enterprises. Mr. Nikolay Kosov said that, according to the IIB’s Country Strategy for Vietnam in the period of 2018-2022, the IIB will strengthen the connection with its partners to promote its operations in Vietnam. On the other hand, in the IIB’s capitalization program, the increased distributed shares of Vietnam will help to strengthen Vietnam’s image and status at the IIB, and the IIB has already had plan for opening a representative office in Vietnam.

In his welcome remarks, Governor Le Minh Hung highly appreciated the impressive performance in the reforms that the IIB has achieved over the past years, which has contributed to helping the IIB to become a modern international development bank, and strengthening its role and status in the international financial community. The SBV Governor also congratulated the IIB on the fact that the Protocol amending the Establishment Agreement and the IIB’s Charter has formally taken effect since August 18, 2018, transforming the IIB into a new operating model in consistence with the international practices. 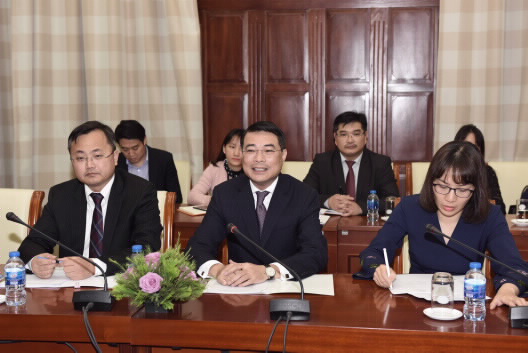 The SBV Governor spoke highly of the IIB's initial efforts in developing credit operations in Vietnam over the past time through loans granted to Vietnamese commercial banks for the purpose of supporting the development of small and medium enterprises, infrastructure development, etc. In addition, he also appreciated the support of the IIB for Vietnam within the framework of the Technical Assistance Fund supported by Slovakia and managed by the IIB through consultancy services for potential projects expected to be implemented in Vietnam.

In order to improve the Bank’s operational performance in Vietnam, Governor Le Minh Hung proposed that the IIB strengthen the cooperation and closely consult with the SBV in the process of seeking potential projects to ensure high quality and feasibility of the projects included in the list in accordance with the development orientations of Vietnam as well as the IIB’s goals.

Governor Le Minh Hung emphasized that, as a representative of the Government of Vietnam at the IIB and a responsible member of the IIB, the SBV will coordinate closely with IIB for more and more effective operations in order to better serve the interests of the IIB’s member countries.

Jozef Kollár, First Deputy Chairperson of the IIB Management Board spoke to Portfolio.Hu: The economic risk of the epidemy is considerable, but one can be prepared for this

IIB Chief economist spoke to the Hungarian weekly Figyelo on Brexit, the bank, the region

IIB building up CEE identity after relocation of HQs to Budapest