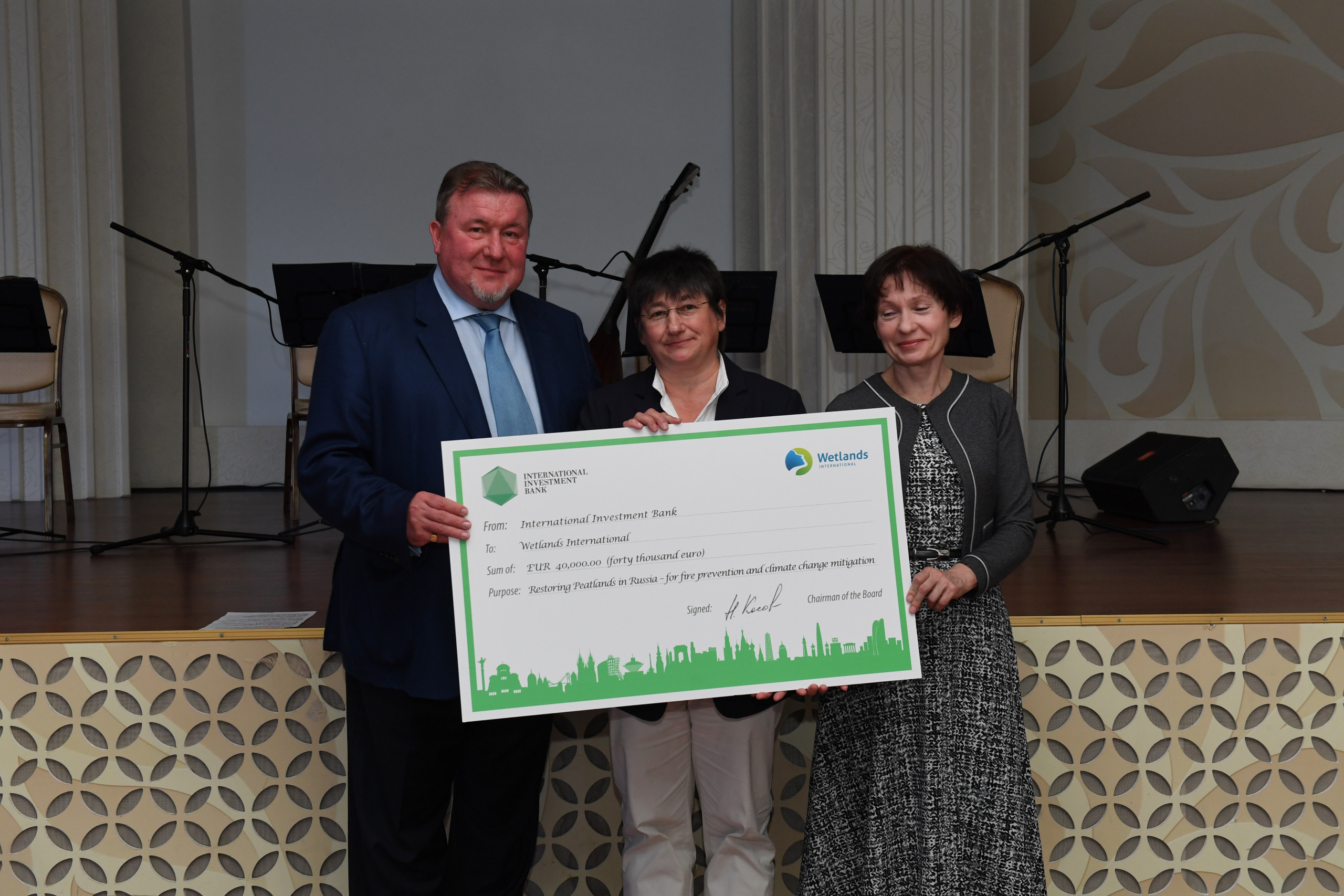 As part of extending its environmental responsibility practice and contributing to the implementation of sustainable development principles in member states, the International Investment Bank (IIB) provided a new grant for execution of a project on restoring peatlands in Russia. This important environmental protection initiative is being implemented by Wetlands International, an international non-governmental organisation.

On June 4, 2018, within the course of events of the 109th meeting of the International Investment Bank Council in Yaroslavl (Russia) Nikolay Kosov, the Chairman of the IIB Board, handed over a EUR 40,000 check to Wetlands International representatives.

The IIB’s environmental grant is intended to support activities related to the implementation of the project on “Restoring peatlands in Russia: for Fire Prevention and Climate Change Mitigation”, including the development of methods of economic stimulation of restoring damaged wetlands. These include, among other things, the implementation of cultivation technologies for waterlogged soils, which is in line with the measures to mitigate the effect of climate change on agriculture proposed by the UN Food and Agriculture Organization (FAO). This approach will make it possible to avoid further drainage of peatlands and wetlands and will contribute to the development of economic incentives of restoring the hydrological regime of the previously drained lands by design and implementation of technologies for growing agricultural crops resistant to waterlogged soil conditions.

“Provision of environmental grants fully complies with the Mission and the goals of the IIB as a diversified development bank that aims to achieve a harmonious balance between nature conservation and development of its member countries’ economies, first of all with a view to improve the living standards of their citizens. All-round support of “green” projects and consistent environmental protection activities are the Bank’s strategic priority to which we will continue to adhere”, said Nikolay Kosov.

“The IIB’s grant for Wetlands International and all the partners involved in the project on restoring peatlands is indicative of high appreciation for the work we’ve already done and represents active support of our plans for the future. We are glad that the Bank helps meet the challenge of restoring peatland ecosystems, which is very important for the ecological situation in Russia, and contributes to implementation of the most up-to-date technologies and approaches to nature conservation”, said Tatiana Minayeva, the project coordinator..

IIB as a modern development institution pays special attention to the environment when implementing its social responsibility projects and initiatives. Since 2015, the Bank has developed internal Guidelines on Assessment of the Environmental and Social Impact of the Projects Financed and, since 2016, IIB has been providing grants for environmental programs in its member states, including charitable contributions to the World Wildlife Fund (WWF) for protection of wildlife in Mongolia and Vietnam and financing development of the Water Risk Filter tool, the WWF’s flagman online product for water monitoring.

For reference
Wetlands International is an independent, not-for-profit, global organisation dedicated to the conservation and restoration of wetlands, their resources and biodiversity. It has 20 regional, national or project offices in all continents and a head office in the Netherlands. With the support of dozens of governmental, NGO and corporate donors and partners, it supports various projects in over 100 countries. Wetlands International's work ranges from research and community-based field projects to advocacy and engagement with governments, corporate and international policy fora and conventions.
The Project “Restoring Peatlands in Russia – for fire prevention and climate change mitigation” is financed under the International Climate Initiative (ICI) by the German Federal Ministry for the Environment, Nature Conservation and Nuclear Safety (BMU), facilitated through the KfW German Development Bank, and implemented by Wetlands International in partnership with the Institute of Forest Science, Russian Academy of Sciences, the Michael Succow Foundation and the Institute of Botany and Landscape Biology, Greifswald University in cooperation with the Ministry of Natural Resources and Environment of the Russian Federation and the governments of the Russian Federation constituent entities.
The project on “Restoring Peatlands in Russia – for fire prevention and climate change mitigation” was one of the winners of the 2017 Momentum for Change award granted by the Secretariat of the United Nations Framework Convention on Climate Change (UNFCCC).

IIB extends support of the international expansion of Bulgarian business: the Bank provided a loan to Eurohold Bulgaria AD